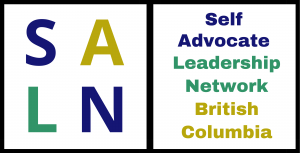 International agreement on the rights of disabled people

April 13, 2021
SALN News–sheet #12: The Government of Canada passes Bill C–7–Our Response.
This News–sheet is a public document. Information quotes and questions are invited to be shared and included outside of SALN.
The majority of SALN members are part of provincial self–advocacy and advisory groups. SALN is aware and interested in the BC self–advocate movement.
All SALN members are well–established and recognizable. All SALN members are from leading groups in the movement.
SALN Mission Statement:
To promote a good life through positive and informed: actions, networking, and advocacy.
SALN would like to share the following:
We are sad, scared, and angry that the Canadian government passed Bill C–7.
For more information: https://inclusionbc.org/un–experts–challenge–canada–over–human–rights–violations–in–bill–c–7/
Details on the statement:
We believe that this has further devalued people with disabilities and many other groups of Canadian citizens.
We are concerned that (as stated by the UN experts) “extending assisted dying to people with non–terminal conditions contravenes Article 10 of the UN Convention on the Rights of Persons with Disabilities” and puts many people with disabilities at risk.
”We support the United Nations human–rights experts that have said the following:
SALN News-sheet 12 April 2021